Voiceover: “Picture this if you will.” Cut to Rod Serling standing with arms crossed and cigarette in his hand standing in the shower.
It is a quiet afternoon in any city USA.  A woman (me of course!) has just stepped out of the shower and dried off.  She puts on a robe, combs her shoulder length hair and reaches for her hair dryer. With her other hand she picks up a round brush.  She turns on the dryer and lifts her utensils to coif her tresses.  Except for the fact that her arms are not strong enough to even hold up a measly blow drier and brush for more than 10 seconds. Her arms immediately drop by her side.

She stares into the mirror. She is quite good at staring.  I’d say almost professional at it.  Well okay, she could at least win a contest. But I digress.  She makes another valiant attempt to create something out of this mop of wet blonde locks.  Second verse same as the first.  No luck. She drops the drier and brush.

On the counter in front of her is a drawer slightly ajar.  Bingo!  A pair of professional haircutting scissors.  Grabbing them and a comb, she holds them up in the mirror and begins to laugh.  No, not your everyday regular sort of laugh.  But a laugh that comes from some where deep inside. A place that no one has ever seen before.  She has just crossed over into the Tremor zone.

She lifts the scissors towards her head. Can she do this?  Her hands begin to shake.  Not too much, but enough that any person with PD should have put them right down.  But Mrs. Any City USA is unflinching ( well technically she really is flinching, but who gives a crap. She doesn’t). She proceeds to hack off large chunks of hair.  She puts her head upside down and shears off more.

When the frenzy is over she looks at the pile of blonde hair in the middle of the bathroom.  She methodically gets dressed.  An odd sound comes from downstairs.  It breaks her out of her trance.  She realizes it is the front door bell, ringing and ringing.

She slowly opens the door and sees four women waiting outside.  She has forgotten, in all of the mayhem, it is Backgammon day.  They burst through the door and begin complimenting her on her new hairdo and asking her where she got it done.  She stops for a few seconds, looking like the cat who swallowed the canary… “I did it myself !”  The women all stop, their mouths agape.  They all yell –

As they walk down the hallway past a hanging mirror, Mrs. Any City USA looks at her reflection, and winks.  Rod winks back. 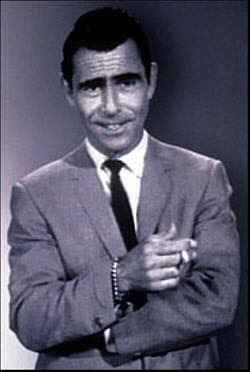